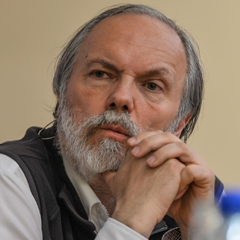 He has been conducting research in the field of physical oceanography for over 30 years, working at the Institute of Oceanology of the Polish Academy of Sciences in Sopot. As part of his professional duties, he spent a year at sea, a year in Germany and two years in California. He studies radiation processes in the sea and the atmosphere, and the interaction of both using various scales. He has studied the processes influencing the climate for the last 15 years. In recent years, he specifically focused on the streams of climate-relevant gases over the sea surface, and the processes linking ocean circulation with the global weather and climate. He serves as the Deputy Chairman of the Interdisciplinary Climate Change Advisory Team to the President of the Polish Academy of Sciences and the Scientific Editor of the Oceanologia journal. He reviewed chapters of the IPCC Reports, participated in selecting satellite Earth observation missions at the European Space Agency. In addition to publishing scientific articles, he is involved in the popularization of knowledge about the climate, being a member of the Scientific Council of the Climate Science portal and giving many lectures and readings, as well as making statements to the media, and even talking to Greta Thunberg in a BBC documentary.