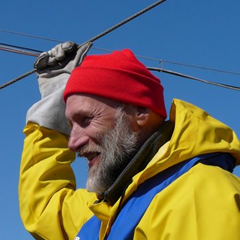 He is a marine ecologist and spent over 50 months on polar and sea expeditions in Russia, Canada, Greenland and Spitsbergen, spending two winters at the Polar Station in Hornsund (1981/82 and 1984/85 as expedition leader).
Author of over 130 articles in international scientific journals, cited over 4,500 times, member of the Sea Research and Polar Research Committees at the Polish Academy of Sciences.
His specialises is biodiversity in the sea and its correlation with the climate change, as well as the relationship between Man and Nature.
He is married, has two children and a granddaughter. His hobbies include the history of research expeditions, canoeing and traditional archery.